“Feel Felt Found" would be a well known objection handling technique to any of you that have been involved sales for some time. It a technique that has been used for a long time. This gives rise to advantages and disadvantages.

Just for a review of the method let's go through an example.

"I'd love to use your service but we just can't afford it."
(Sound familiar?)

A brief example of using "feel felt found", would be something like the following.

"I understand how you feel.

Mr Jones over at Allied Inc felt the same way for a long time.

was minimal and was far outweighed by the benefits of our premium service."

This is quite an effective tack for dealing with sales objections.

Why Does Feel Felt Found Work

So, the question becomes, why does "feel felt found" work and can we use something similar to get the same, or better, results?

I believe it works in handling sales objections for several reasons:

In understanding how they feel you build empathy and rapport with them rather than confronting their belief.

You are letting them know that this initial thought is common and this puts them at ease as it lets them know they are part of a group (Social Proof).

When they are attached to that group, then you move the whole group by telling how the person in the group bought and changed their mind. (using Social Proof to influence them to buy)

By giving details about what others found you add motivation for them to buy (i.e. don’t just say everything was fine)

In other words it paces the prospect's current experience and then leads them to consider the experience from a different point of view.

(As I’ve written before, meet them where they are and lead them to where you want them to be)

It Also Works at a Subconscious Level

It sells indirectly, via the "quotes" or experience of the other customer.

It tells a story

Everybody Loves to Listen to a Story

People stand around at parties telling them.

People lean over the fence to tell stories to their neighbour.

The minute you start talking about the experience of another person who now uses your product or service you get your prospect involved in the story.

So, you have your prospect's attention.

If you'd like a Blueprint of how to handle objections as a simple infographic ...

I love the intricacies of language.

What this technique does is it moves the prospect's objection into the past and offers an alternative belief for them to consider.

When you first refer to the prospect's objection using "feel felt found" you use the verb “feel”, which is present tense and thus mirrors the prospect's current thoughts on your offer.

Then when you start talking about “Mr Jones” it is quite likely that your prospect will associate with Mr Jones' experience (especially if they have a similar business) and then you are using "felt" which is past tense.

By using the verb in the past tense you are changing your prospect's objection from an objection they are having now to one that they HAD in the past.

This opens up the prospect's future to consider a new reality.

Finally, when you start talking about what Mr Jones "found" you preface that verb with the phrase "after he started using our service".

So, you move the prospect into the future AFTER having used your service and then invite them to consider the good experience that Mr Jones had.

Of course, when they consider what Mr Jones found they are trying it on themselves, aren't they?

So, the advantages of the Feel Felt Found technique are that it’s easy to use and has been used for a long time.

This also creates a problem in that because it’s been used for a long time any experienced buyer would recognise it.

And the trouble with any "scripted" approach like this is that it is even easier to spot.

There is also the danger that becasue it’s so simple to use that a salesperson will overuse the technique and try to answer every objection using it.

There is another concern. If you are not genuine and don’t really care about the customer their BS detector will pick up on that. It will break rapport rather than building rapport. 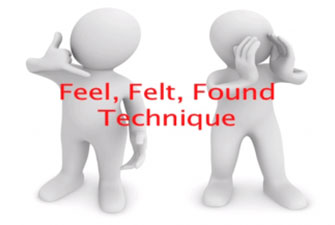 Now that you know how “feel felt found" works by using verb tense and story to counter an objection you can come up with a general formula to do something similar, without risking being caught using a “ semi-scripted technique”.

So, back to our original statement,

"I'd love to use your service but we just can't afford it."

“I appreciate our service is not cheap.

Have you always thought about our service in that way?

Having had that thought it would not have been easy to consider using our product, would it?

You know many of our current clients used to think that same way until they started using our service.

For example, Mr Jones told me, after he'd been using X for a while that his Y far exceeded his previous…"

This achieves the same results as “feel felt found" and is much less likely to be detected as a scripted way of answering sales objections. It is a little more complicated but there is a framework to follow.

I ran across a webpage recently that mentions how an NLP trainer, Jonathan Altfeld, uses this technique.

Jonathan replaces “I understand” with “Some people feel…” and this removes the problem of the customer feeling you are insincere. It also further enhances the prospect’s connection to that group.

To quote Jonathan’s example from the webpage …

“I know a lot of people felt that way until they decided to take charge of their future no matter what obstacles present and found that no matter how much random weirdness occurred, it was still up to us to follow through on all our responsibilities and promises.”

For a much more detailed explanation of Jonathan’s approach go read his article "feel-felt-found works better".

Using the Feel Felt Found technique or modified process takes some practice but the results could well be worth it.

If you do not want to get caught out you could use the template on this page to devise your own response or try Jonathan’s approach.

Anyway, you don't have to believe me, just give it a try and see what results you get.

If you'd like a Blueprint of how to handle objections as a simple infographic ...