Success has many different elements to it, such as luck, talent, and hard work is needed and valued, but what is the one key element of success?

Many of life's failures are people who did not realise how close they were to success when they gave up.
Thomas Alva Edison

The great Napoleon Bonaparte was interviewed after he was defeated by the Duke of Wellington's forces at the Battle of Waterloo and imprisoned.

One of the reporters asked a critical question ...

"Mon general," the reporter asked, "Tell me why the English won at Waterloo. Did they have a superior army?"

"Well, did they have better weapons?" asked another reporter.

"No!" was the answer again.

Then the first reporter asked, "Why then, Mr. General, did the English win?"

Napoleon's eyes slowly swept across the room. The silence was so deep that it was almost deafening. You could have heard the proverbial pin drop. Then he replied, "The English fought five minutes longer."

From the mouth of the great general himself came the answer,
"The English fought five minutes longer".
Many times, five minutes longer is all that it takes.
Times have changed from the days of Emperor Napoleon.
But many things still remain the same. 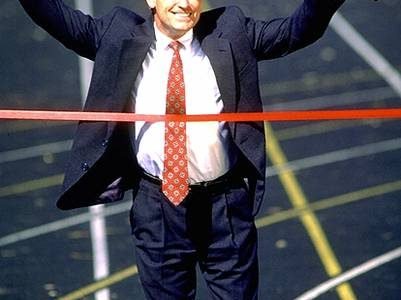 "Success is an auditor.
And, it seems to value persistence with a weight more significant than most other factors.
It seems to favour those who are willing to keep going when others quit.
It also seems to require your persistence to be deployed as the natural response to missteps, mistakes, and setbacks.
It’s a test to see whether you are prepared to pay the price in full and in advance for what you say you want."

The main ingredient between people who quit when the going gets tough, and those that manage to achieve their goals and have success is one thing. Persistence. Persistence does not quit, even when there are setbacks and failures. The persistent person keeps going, until their goal has been reached. It is the greatest element of success.

“Of all the human attributes, this is the linchpin. It is creativity in action. It allows one to solve problems and adjust their strategies and tactics.
When plan A fails, resourcefulness gets you through the rest of the alphabet.
Sadly, ingenuity is not always enough by itself, even though success demands it of you.”